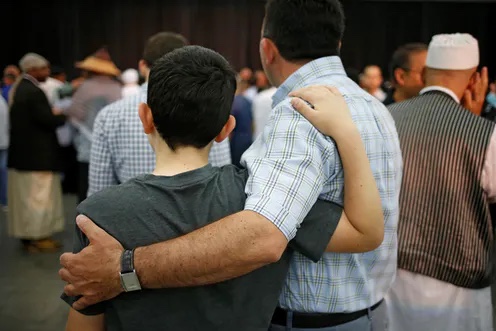 Young people around the globe today are growing up with ideals, expectations, ambitions and talents which are unprecedented, often unheard of by earlier generations. Much of this is driven by advances in technology, affluence and the effects of globalisation. For a nation to succeed, it needs to invest in its young people (their skills and capabilities) such that they act as advocates and change agents to assist society to meet new challenges in the future.

A Muslim is required to dedicate all his endeavours to Allah the Almighty in all his actions and words; remembrance and thinking, sleep and waking, worship and daily living, love and hatred, giving and withholding. Allah says in the Qur’an:

A Muslim has only one vision, to seek the pleasure of Allah through which Allah will grant him or her success in the hereafter. We must acknowledge that our actions alone are insufficient to earn the lofty prize of the afterlife but hope that we can attain it through the mercy of Allah, the Almighty. A Muslim is a true global citizen and this can be proven by searching through history. Muslims were a superpower that lead humanity for over 1000 years under which nations and civilizations coexisted side by side in peace and harmony. Muslims are people of values, we have a very broad and rich set of values that are timeless and fit for all people irrespective of race, colour or gender. From this set of values, I would say there are 3 top values that youth should focus on in this modern era. So, what are these values?

Abu Huraira (may Allah be pleased with him) reported: The Prophet (peace and blessings be upon him) said:

“There are seven persons whom Allah will shade on a day when there is no shade but his. They are a just ruler, a young person who grew up in the worship of Allah, a person whose heart is attached to the mosques, two persons who love each other and who meet and depart from each other for the sake of Allah, a man whom a beautiful woman of high status seduces but he rejects her by saying I fear Allah, a person who spends in charity and conceals it such that his right hand does not know what his left hand has given, and a person who remembered Allah in private and he wept.”

Referring to the hadith above, we can see that a person in his youth is faced by temptations/trials. With this note in mind, it is very important to build the faith of the youth from an early age. If our youths’ beliefs are strong then they are better able to protect their religion when interacting in the real world. Youth are young, vulnerable, impressionable and often foolish! Youth everywhere have similar needs/wants and many of them are driven by their desires. In a capitalist society, individuals are very materialistic and focus on themselves whilst ignoring others.

We need to have youth leaders that carry a strong vision, leaders who can stimulate others to make it their vision too. A youth leader can rally other youths to think big and help the community flourish. We should remind ourselves of a beautiful quote from the greatest of all leaders, our beloved prophet Muhammad (peace be upon him) as reported in Sahih Muslim, he said: “The strong believer is better and more beloved to Allah than the weak believer”.

The strong believer is the one who is strong in his iman, body and actions. Therefore, the strong believer is productive and accomplishes more things for the Muslims hence he or she is truly an asset to his friends, family and the wider community. Muslims have high standards, we should aim for the best and reach the top. We are people of quality, sincerity and direction. Our youth need to be people with such characteristics.

According to an article publish in November 2016 by Bloomberg, it stated that Nigeria’s population reached 182 million with more than half its people under 30 years of age. It further adds, “Nigeria, Africa’s most populous country, is witnessing a growing youth bulge, with those under 14 years accounting for more than 40% of its citizens”.

The youth are assets, they’re the future of a country. We need to know how to plan for their transition from youths to the next category. Thousands of young people face acute difficulties in making the transition to adulthood. We Muslims must concentrate on making this transition smooth and successful. Parents, educators and elders in society can help make this transition possible in many different ways. I would like to remind you of 3 important things to help with this transition.

The youth of today need to be instilled with the following 3 key qualities:

We ask Allah the Most High to guide the youth all around the world such that they lead meaningful lives that contribute to the well-being of mankind. By them doing this, it is hoped that they are always striving to seek the pleasure of Allah which can lead them to success in this world and the hereafter.