Difference Between the Creator and His Creation 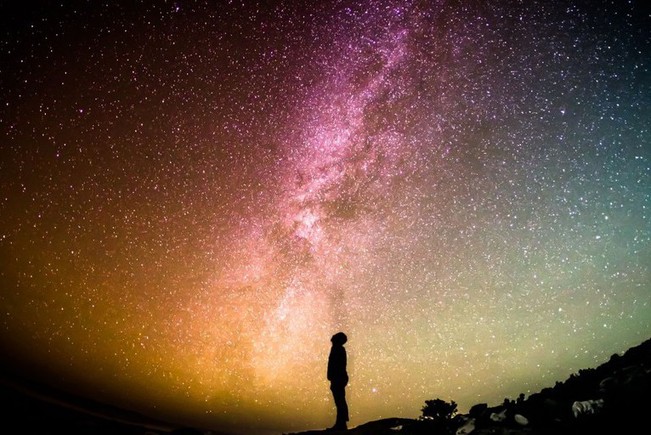 Ibrahim and his believing family, i.e. the Prophets and those who believed in them, knew that there had to be a difference between the Creator and His creation, and between obedience and sin.

The more the slave realises this difference, the more he increases in love and servitude towards Allah, so he turns further away from worshipping, loving and obeying anything except Allah. Those misguided mushrikin, on the other hand, view Allah and His creation as equal. Ibrahim said:

“Do you then see whom you have been worshipping – you and your fathers before you? For they are enemies to me; not so the Lord and Cherisher of the Worlds.”
Al-Qur’an 26:75-77

An example of this is the concept of fana’ (extinction of individual consciousness, recedence of the ego, obliteration of the self). Fana’ is of three types:

“I want not to want anything except what He wants what pleases the Beloved (i.e. Allah).”

The second type of fana’ is oblivion towards others, which is attained by many of those who follow the path, because their hearts are strongly attracted to remembering, worshipping and loving Allah, and distracted from noticing anyone or anything else. Nothing crosses their minds except thoughts of Allah; they are not even aware of anything else, as was said in the interpretation of the ayah:

“But there came to be a void in the heart of the mother of Musa: she was going almost to disclose his (case), had We not strengthened her heart (with faith) … ”
Al-Qur’an 28:10

They said: Her heart was oblivious to everything except thoughts of Musa, which is a kind of thing that often happens to those who are overwhelmed with some concern, whether it be love or hope or fear, the heart is distracted from everything except that which is loved or hoped fro or feared, so that it is unaware of anything else.

If this kind of fana’ overwhelms a person, his focus on Allah becomes so intense that he is no longer aware of anything else, not his own existence or the dhikr he is doing, and everything diminishes in his senses, every created being, the person himself and everyone else, and there remains only the Lord. What is meant is that everything is diminished in a person’s perception, so that he no longer notices or remembers anything, and is quite oblivious to what is going on around him. If this feeling becomes so strong that the person becomes confuse and can no longer make proper distinctions, he may think that he is his beloved, as it was said that a man fell into the water, and the one who loved him himself in after him. The former said, “I fell by accident: what made you fall?” and the latter replied, “I was so overwhelmed with love for you that I thought I was you.”

This idea has caused many people to stumble, so that they thought in terms of physical unity whereby there is no longer any difference between a person and the object of his love. This is incorrect, for the Creator cannot be united with anything at all. Indeed, nothing can be totally united with anything else without becoming something else altogether; the essence of two things is lost when they unite, and they become a third thing, neither this not that, as is the case when water and milk are mixed together, or water and wine, and so on. But what is loved and wanted by both becomes one, and what is hated and loathed by both becomes one, so they love and hate the same things. One loves what the other loves, hates what the other hates, befriends those whom the other befriends and takes as enemies those whom the other takes as enemies.

This kind of fana’ is far from perfect.

The greatest awliya’, like Abu Bakr and ‘Umar, and the earliest muhajirin and ansar, let alone the Prophets who are above them in status, did not experience this kind of fana’. This emerged after the time of the sahabah.

The sahabah never experienced this type of fana’ or any loss of their faculties because of the strength of their iman in their hearts. The sahabah, may Allah be pleased with them, were too strong and firm in their faith to loose their minds in this fashion, or to experience any kind of swooning, loss of consciousness, intoxication, oblivion, rapture or ecstasy.

These things began to emerge at the time of the tabi’in, among the worshippers of Al-Basra, among whom were some who would swoon or even die when they heard the Qur’an, such as Abu Juhayr ad-Darir and Zararah ibn Awfa, the qadi (judge) of Al-Basra.

Some of the sufi shaykhs experience a kind of oblivion and intoxication where they are unable to make proper distinctions, and when they are in this state, they may say words which, when they come round, they realise are wrong. Such stories are reported about (ascetics such as) Abu Yazid, Abu’l-Hasan an-Nuri and Abu Bakr ash-Shibli, and so on and so on, unlike Abu Sulayman ad-Darini, Ma’ruf al-Karkhi, and Fudayl ibn Ayyad, let alone Al-Junayd and so on, who remained of sound mind through out all their experiences and who never fell into states of oblivion or intoxication etc. those who have reached a level of perfection have nothing in their hearts except love for Allah and the desire to worship Him alone. They have vast knowledge and proper discretion, so they see things as they really are, and they see that created beings exist only by the command of Allah, and are controlled by Him, submitting to His will and turning to Him. This increases their faith and insight, and whatever they see of His creation supports and enhances the sincerity and submission of their worship of Him alone, with no partners or associates.

This is the reality to which the Qur’an calls. This is the basis of the perfect faith of those who truly know Allah, of whom our Prophet is the leader and most perfect. Hence when he was taken up into the heavens (the mi’raj), and saw the signs and wanders that he saw, and received Revelation there, the next morning no trace of his experience could be seen on him, and he did not look any different, unlike Musa who had lost consciousness (when he spoke to Allah). May the peace and blessings of Allah be upon them both.

The third type, which may be called fana’, is where a person affirms that nothing exists except Allah, and that the existence of the Creator and the existence of His creation are one and the same, so there is no difference between the Lord and the slave. This is the fana’ of misguided heretics who think that Allah is part of the universe. This ides was disowned by the shaykhs, one of who said, “I do not see anything except Allah” or “I do not look at anything except Allah” and so on. What was meant by this was: I do not see any Lord except Allah, or any Creator or Controller except Him, or any God except Him, and I do not look to anyone but Him with love and fear and hope. For the eye looks towards that to which the heart is attached. Whoever loves a thing, or has hope in it or fears it, will turn towards it. If there is no love for it in the heart, or hope or fear or hatred, or any other emotion that ties the heart to it, then the heart will not turn deliberately towards it or look towards it. If it accidentally glances at it, it will be like a man who happens to glance at a wall or anything else that means nothing to him.

The righteous shaykhs, may Allah be pleased with them, mentioned something about true tawhid and sincere submission, whereby the slave does not turn to anything except Allah and does not look to anything other then Him, whether in love, fear or hope; the heart is empty of every created being and does not look at them except with the light of Allah.

This third type of fana’, which believes that Allah is what one can see (pantheism), is the idea, belief and tawhid of the people of Pharaoh, and of other similar types such as the Qaramitah (Karmathians) and so on.

On the other hand, the kind of fana’ experienced by the followers of the Prophets is the praiseworthy kind of fana’, and the one who experiences it is one of those whom Allah praised by calling them His pious friends (awliya’), successful supporter and victorious troops.

These shaykhs and righteous people did not mean “what I see of the created beings is the Lord of the heaven and earth.” No one would say such a thing except those who are totally misguided and corrupt, whether the fault is in their way of thinking or in their beliefs. Such people are in a state between madness and heresy.

All the trustworthy shaykhs agree with the consensus of the early generations and imams of this ummah, which is that the Creator, may He be glorified, is distinct from His creation; there is nothing of His essences in His creation, and nothing of His creation in His essence. It is essential to distinguish the Ancient and Eternal One Who has no beginning from the finite event of existence, and to distinguish the Creator from His creation. The shaykhs have said much more on this topic then we can discuss here.

They have spoken about the diseases and doubts that may affect people’s hearts and minds. Someone may see creation, and think that it is the Creator of the heavens and the earth, because he cannot distinguish between them in his mind. This is like the one who sees a ray of sunlight and imagines this to be the sun itself.